Play. Lots of
Play is a natural state for young children and is their main activity, including cognitive. Play is the best way to acquire information and skills. You want your child to understand something – play with him. The language of the game – the most understandable language for children.

2. Translate everything into body language.

Everything that we do with the child must be passed through his body. Through play and through the body.

We translate one movement into another, and then we start to translate them into numbers. We speak to the child in the child’s body language, a language he or she understands. Ask him: “Are you a math magician addition“?

3. no abstractions
When they say “my child can count to 20”, “my child knows how to count to 100”, most often they mean that the child can say a patter or a rhyme “one-two-three-four-five-…” and so on. But that’s not counting yet.

What do we do when we do math activities with preschoolers?

First, we advise parents not to rush into counting.
Second, we use a variety of counting materials as much as possible. Anything we count, we have to count on some kind of object.
Example. For four-year-olds, for example, playing with counting beads is like magic or a trick in a circus. You can put any number of beads on a string – five of one color, five of another. This is quite enough for a small child. And then you clasp some beads in the middle in your fist: “How many beads have I hidden now? What color?”. And then the child says, “Well, let me tell you a riddle and you guess it.” He tells me, and I look at him and say, yeah, you hid one blue one and two red ones. The child unclenched his hand – and it’s true, one blue and one red!

We use everything: counting sticks, counting cubes and simply cubes, numicon and its Russian analogue which is called “Alice”, count on fingers (we necessarily count on fingers!)… When children touch all these 1-2-3-4-5 with their fingers, move from hand to hand or from pile to pile – they begin to understand them.

4. Choose, compare, do the same…
Basically, these are logical tasks. Identifying similarities, differences, patterns. And children cope with them, and do them with enthusiasm and very diligently. 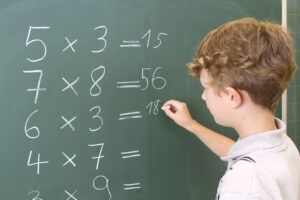 Very young children (2-3 years) we ask them to put the dice: red on a red plate, blue – on a blue one. Sometimes children do not yet know what word for what color, but they cope with the task.

Everyone has done it, so we can move on. Here I’ll put three cubes of a tower, you fold the same. Many children say, “No, I’ll do it, and you do it again. That’s good, too. In this version, you can make a small mistake and ask your child, “I did exactly as you did? And look carefully? Or maybe this cube should be moved to the edge? Or a triangular cube turned the other way around?

5. Say .
And what other tower can be made of the same three cubes? Yes, a triangular cube on the side, not just on top. And now another one, similar to the first one, but it has a cube on the edge. And we voice everything we do. Because without speech, we’re not going anywhere. On, above, under, in the middle, on the edge… It’s important, it’s spatial thinking.

Classes with kids (ages 2-4) should be playful! Everything that the child learns, he must play with his body and touch it with his hands. The time for abstract concepts will come later. Right now, the child has to play, move, talk and touch!