An abacus is usually very simple in construction and basically consists of a frame in which
balls are threaded from rods. These balls represent by their position a certain number, i.e.
it is based on a place value system.
The abacus is called the oldest calculating machine, although it is hardly used nowadays.
is used nowadays, sporadically from the Balkans to China. In Austria it is also called the slacker. How to use an abacus? 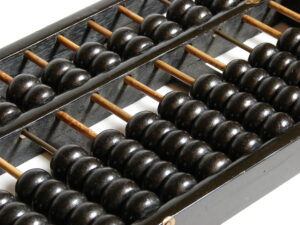 The origins are believed to be around 1100 BC in the Indo-Chinese cultural area,
Madagascar or Central Asia. For the today’s, in the European area
the abacus used in Europe today, its cultural origins lie in ancient
Greece, whereby this still had very little to do with the today’s
conception had to do. Likewise, a hand abacus developed in
ancient Rome, which was very similar to the Japanese.
Only by Adam Riese the calculating in the today usual
decimal system became popular and was perfected, so the “zero” was
was cleverly used for arithmetic. And yet, how to use an abacus?

Russian Abacus
This is called Stschoty, which means calculation.
It was preferred to the pocket calculator until the 90’s, but nowadays it is
but today it can only be found in rural areas.
The arithmetic beads are arranged horizontally, in rows, whereby
the 5th and 6th bead are of a different color.
A particular row contains only four arithmetic beads, although here it is
modern it can be called a joker, for example, to represent a comma.
Historically, it offered the possibility to calculate with quarters.
Chinese Abacus
Also called Suan Pan, it is still used today for learning basic arithmetic
basic arithmetic by children.
Here, the arithmetic beads are arranged in vertical rows
and have a two-part construction, because the frame is divided
by a crossbar into an upper and lower part
Roman hand abacus
Russian Stschoty
Chinese Suan Pan
Zach Anita
1009349
separated.
The upper part is called heaven and contains 2 beads, each of which has the value 5 and
the lower one is called earth and contains 5 beads, each of which has the numerical value 1.
Japanese Abacus:
This is called Soroban and is a
further development of the Chinese Suan Pan.
The arithmetic beads are also arranged in vertical
rows, but there is only one bead above the
bead above the bar and four below the bar. 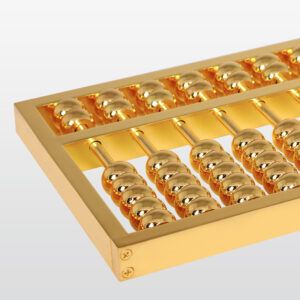 Here the arithmetic beads are arranged horizontally to form
ten rows with ten beads each.
These are thus moved horizontally for arithmetic.
Since a written description of the functioning of a
European abacus contains a lot of pictures and a lot of text
I will not record it here.
But there is a very good video on Youtube about calculating the four basic arithmetic operations with the
the European abacus.
Input: The abacus in the year of mathematics